From early personal models, right through to the high-end of e-cinema, the potential of laser lightsources has excited the projector market. Recently, this potential has started to crystallise, with pure laser and laser-phosphor projectors populating the mainstream in every major category.

The short history of lasers in projection has been sufficient to create generate a number variants of the technology. The most familiar is the well-documented LED-laser hybrid, popular in offices and schools –  application where Total Cost of Ownership (TCO) is the customer’s main consideration. TCO factors in the additional costs of replacement lamps (bulbs)and cleaning of filters which contribute to the overall cost of the projector over its lifetime. 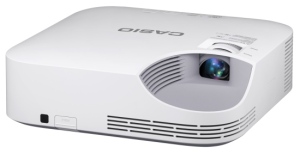 Laser projectors are about more than maintenance cost savings. Some even talk about it “combating the flat panel advantage”. In applications like digital signage, pure laser projectors and laser phosphor offer the reliability, consistency and flexibility of installation to enable novel signage formats and environments.

New to the market

In recent months, we have seen progress at both ends of the laser lightsource spectrum. The entry-level continues to be dominated by the laser-LED hybrids from Casio, Optoma and others active in education. Using this hybrid technology obviates the brightness limitations inherent with LED alone.

Laser-only projectors don’t suffer from these limitations but they are more expensive at present. Fortunately, growth in demand from other sectors has driven down market prices for 1.6-watt blue lasers, which can be used with phosphors to create a cost–effective hybrid alternative to pure laser models.

As long ago as 2012, BenQ launched the Laser-phosphor LX60ST in which the BlueCore engine creates all three primary colours using a laser with a phosphor wheel. This showed that it was entirely possible to produce a laser light engine without resource to LEDs. But it is to pure laser technology that the industry tuned for super-bright solutions.

At the high-end, pure laser projectors can go beyond the current 12K-lumen limit of laser-phosphor models. 60K lumen products are already on the market and even higher brightness levels are in development.

These powerful, ultra-bright projectors have found an initial niche in digital cinema, but adoption of this technology is already moving into other sectors. Barco, for example. has announced that the company would make its digital cinema range of laser projectors available to rental and staging customers, large entertainment venues, live events, simulation and other applications.

The Barco pure-laser models join Christie’s high-end laser models based on the Christie Freedom laser illumination system. The Christie laser projection system used in all models is based on a scalable laser light source with a choice of projection heads and a fibre cable that connects the laser light source with the projection head. The Laser Module consists of multiple RGB lasers, a cooling system and a fibre connection, which allows each module to be self-contained.

For the business customer, it’s not just the potential for extreme brightness that appeals – it is also the consistency of colour and output. A laser lightsource can maintain this consistency over as many as 50,000 hours. The universal appeal for consistent colour and low maintenance has driven some pioneers to adopt laser as a differentiator in markets where lower downtime and operating costs justify the small premium charge over lamp-based models.

“This announcement marks an exciting shift in the market. Sony’s pioneering technology delivers on the promises made to our key partners to produce innovative products that perform and exceed market demands. Installation projectors not only have to reproduce the highest quality images but also be relatively maintenance free and eco-friendly. The Laser Light Source Projector delivers on all accounts being mercury free, offering an incredible brightness of 4,000 lumens.”

Sony completed its laser-illuminated suite with the ultra short-throw VPL-GTZ1, using the company’s 4K SXRDTM laser phosphor light source. The 2,000 lumen projector can throw high-resolution images up to approximately 147 inches diagonal and zoom down to 66 inches*, achieved by respective 7inch and zero inch distances from the screen. The obvious application for this model is education, but others include museums, design simulation, fashion, oil and gas, simulation and training. Users can blend multiple projectors with third party software.

Epson showed its initial foray in Laser-phosphor. Both the LS10000 and 9600e use two blue lasers to create light. To create red and green the other blue laser plays on a yellow phosphor. With an anticipated projector lifetime of 30,000 hours, Epson also says that the laser lightsource reduces the cooling overhead, with a corresponding reduction in noise levels.

With the potential for super-high brightness, colour consistency, long product lifecycles and lower TCO, there is widespread belief that laser projection is the future. With numerous prototypes and preview models on show at trade shows in the first half of 2015, pure laser and laser-phosphor is here to stay.

Of course there is some descent: there are reports of ‘speckle’ on the screen; energy consumption induced by projector cooling; and, of course, the involvement of regulatory bodies in the safety aspects are all minor concerns. There have been difficulties in sourcing some classes of lasers and some supplies of these components have been criticised for a lack of brightness.

For the present, market researchers Futuresource reports that laser and other solid-state lightsources represent single digit percentages of the projector market (excluding handheld and embedded personal projectors) but laser-phosphor is taking market share in volume markets because it can demonstrate favourable Total Cost of Ownership figures when compared to conventional lamp technologies.